Headings are the titles and subtitles you see within the actual text of much professional, scientific, technical, and business writing. Headings are like the parts of an outline that have been pasted into the actual pages of the document.

Headings are an important feature of professional writing. They alert readers to upcoming topics and subtopics, help readers find their way around in long reports and skip what they are not interested in, and break up long stretches of straight text.

Headings are also useful for writers. They keep you organized and focused on the topic. When you begin using headings, your impulse may be to slap in the headings after you’ve written the rough draft. Instead, visualize the headings before you start the rough draft, and plug them in as you write.

Use headings to mark off the boundaries of the major sections and subsections of a report.

The style and format for headings shown in this chapter is not the “right” or the “only” one; it is just one among many. Be sure to ask your instructor or supervisor about internal style preferences.

When formatting your headings and subheadings, pay close attention to details such as vertical and horizontal spacing; capitalization; use of bold, italics, or underlining; and punctuation.

The first section of a report is the Introduction, but because it is understood to be the introduction, no heading is needed. Instead, place the title of your paper or report in place of the word “Introduction”. Subsections of the introduction will use Level 2 headings.

If you are adhering to APA Style formatting use the following heading styles: 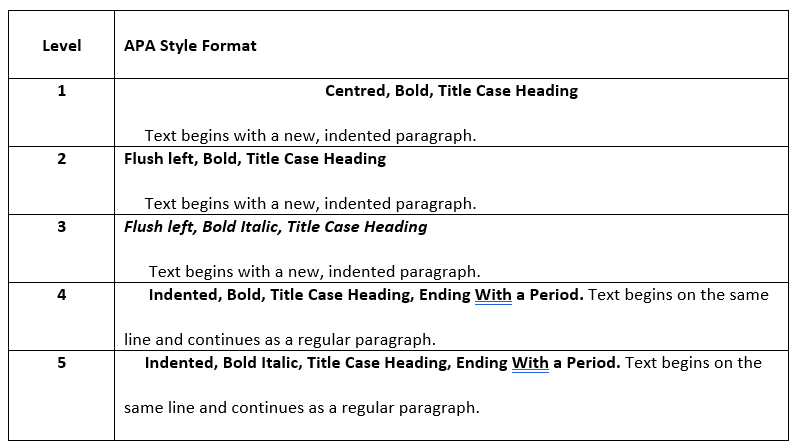 The Example Analytical Report in Chapter 4.16 uses different formatting for headings. This format is preferred in Dalhousie University’s Business Communication course. Note that the instructors in this course prefer block style paragraphing, another internal standard within the course. 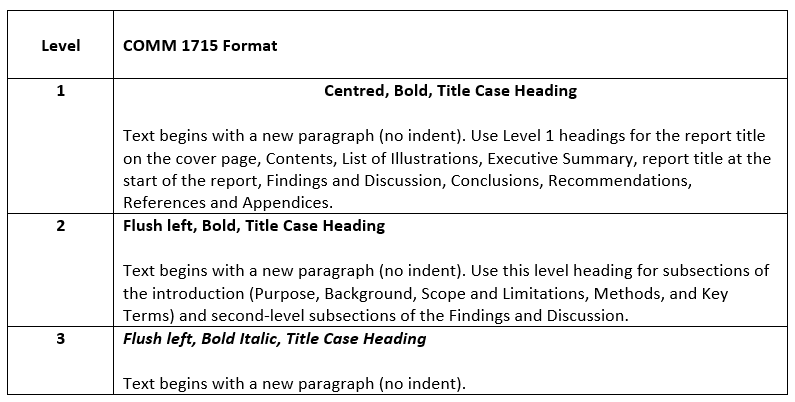 Ask your instructor or work supervisor what internal standards might apply.

This chapter is an adaptation of “Headings” in the Online Technical Writing Textbook by D. McMurray and is used under a CC-BY 4.0 International license.